After searching for an effective fat burner, you've stumbled upon countless different products. They all have different ingredients, and you're overwhelmed.

It's hard to make a choice, and it makes you wonder…

Which one will work and help you reach your goals?

Well, that's what we're here for. We review supplements, and today you're in luck – it's a weight loss product.

Allow me to introduce you to the Transparent Labs Fat Burner. It's one of the more popular weight loss supplements on the market, but is it really going to help you get lean?

If you want to learn more about the best and most effective fat burners of 2021, click here to check our top 10 fat burners. 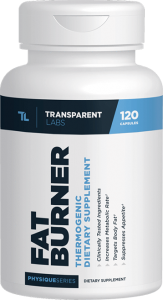 After trying out Preseries BULK, we got curious about the other brands' supplements, which is why we've decided to try out a few more.

So, we went ahead and ordered a bottle of the transparent labs fat burner to test it out. We've tried it for an entire month – we've done this on purpose so that we can give an accurate review of what to expect.

It's also important to note that we highly appreciate label and ingredient transparency. That's why we like Transparent Labs; you won't have to worry about any proprietary blends or hidden ingredients.

What To Expect From This Fat Burner

There are many reasons why you should consider adding products like this to your weight loss routine. Of course, not every product has the same effects, as those are determined by the ingredients it contains.

Since the transparent labs physique series fat burner holds only high-quality and science-backed ingredients, it's going to have a significant impact.

As we've mentioned, we've put it to the test for 30 days. Here's what we experienced during the time we were on it:

These effects could be felt from day one, as we found that it starts working within roughly 30 to 60 minutes after taking it. If you've had a meal, it can take slightly longer to start kicking in.

When you take a look at the benefits mentioned above, you'll understand why fat burners are an excellent supplement to take while cutting. Don't get me wrong; it's not a magic pill that's going to do the work for you.

But, if you have nutrition and training dialed in, it's going to help you reach your goal weight faster.

If you want to pick up this product, you can buy it by clicking here.

As we've just shown you, this is quite a good fat burner supplement. The reason why it works is that it holds a reliable combination of ingredients.

We're going to show you what ingredients it contains and what each compound adds to the formula. By doing so, you'll get a better understanding of why this fat burner is one worth trying out.

Below, you'll find the supplement facts of the Physique series fat burner by Transparent Labs. 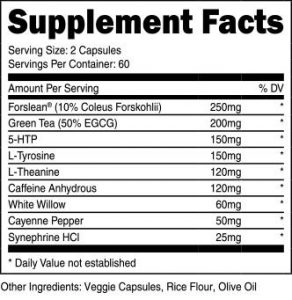 Forslean (250mg): This ingredient helps the body to increase the release of fatty acids. Clinical studies have shown Forskolin to be a safe and effective weight loss regimen.

Green Tea (200mg): Green Tea is a staple ingredient found in many weight loss products. Besides being high in antioxidants, it is also said to help increase fat breakdown

5-HTP (150mg): 5-Hydroxytryptophan is a serotonin precursor. Increasing the body's serotonin levels might have benefits when it comes to losing weight. Research has shown that it increases the feeling of fullness, making you crave and eat less whilst dieting. Basically, it works as an appetite suppressant.

L-Theanine (120mg): When L-Theanine is stacked with Caffeine and L-Tyrosine it could help with reducing body fat.

Cayenne Pepper (50mg): This type of pepper contains capsaicinoids which are said to help support weight loss. The combination of Cayenne Pepper, Green Tea and Caffeine has shown to increase thermogenesis and decreased fat mass.

Caffeine Anhydrous (120mg): This stimulant is known for boosting energy but it also has very strong fat burning effects. It increases thermogenic effects throughout the day, which helps you burn a lot more calories. Besides that, it's also great for enhancing performance.

Synerphrine HCL (25mg): Synperphine is sourced from the citrus fruits. It's fat burning abilities have been backed up by over 25 clinical studies. When it's stacked with caffeine, the effects become even stronger. You'll burn more calories which results in more weight loss.

You shouldn't experience any side effects from taking this product. Throughout our 30-day experience, there were no adverse effects at all.

With that being said, it does contain a moderate amount of stimulants, so if you are sensitive to them, make sure to start with a low dosage.

It might also not be a good idea to stack it with other products containing many stimulants, such as a pre-workout supplement.

If you're looking for a pre-workout supplement that doesn't contain stimulants but does help you enhance workout performance, we advise reading our intra workout and BCAA article.

Where Can I Buy Transparent Labs Fat Burner?

We purchased our bottle directly from the official Transparent Labs site, and we recommend you do the same.

The reason for this is that, when buying from the official site, you'll know that the product is the real deal.

If you click the button above, you'll be taken to the correct site. They also have some other useful products for sale, which might be worth checking out.

If you don't think this is the right product for you, take a look at our top 10 fat burners of 2021. It contains even more potent products, and they pack a lot more power.

We've shown you what you can expect from this supplement. If you are serious about losing weight, you should consider buying and using the Transparent Labs Fat Burner.

It contains a lot of different ingredients that have been proven to help improve weight loss. In my opinion, it's formulated correctly if you want to get real results.

You can tell that the company has putten a lot of effort into formulating this product, and everything is backed up with clinical studies.

Make sure to purchase this product from the manufacturer's official site. Don't forget to check out our other weight loss supplement reviews.

Here's a few worth checking out:

Have you tried Transparent Labs' fat burner? Let us know if it helped you improve weight loss in the comments!

Animal Cuts Review: This Happens When You Take 1 Full Serving

Vintage Burn Review: Should You TRY This Fat Burner?

We will be happy to hear your thoughts