Psychotic by Insane Labz is said to be one of the stronger pre-workout supplements out there.

We've had several inquiries of readers asking us to review this product, so today, we're presenting you with our experience.

We're going to look at the effects, ingredients, side effects, and if it's worth picking up.

What To Expect From Psychotic

You're probably reading our Psychotic pre workout review to find out what's it able to do when it comes to performance.

Well, the main thing you can expect from using this product is a significant rush in energy. One scoop will have you ready to hit the weights.

What we're usually looking for in a pre-workout is that it helps increase your workout performance from several angles.

We found that Psychotic only increased our performance by supercharging energy levels. We didn't notice a significant increase in muscle pumps or focus. 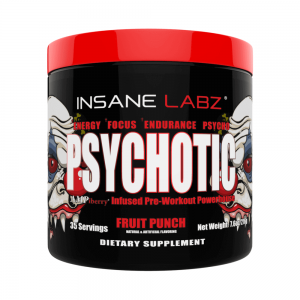 So if you're really looking to optimize your energy levels when working out, this is definitely a product to consider.

I'm more a fan of a balance between energy, pumps, and focus. I find that when those three are in check, you can get in a fantastic workout.

When a product focuses too much on boosting energy, it can become too much due to the many stimulants. That's also when you potentially experience a ”crash” after it starts to wear off.

The first thing we want to point out before discussing the ingredients found in this pre-workout, you should know that Psychotic contains a proprietary blend.

The SupplementsReviewer team is not a fan of proprietary blends because this means that exact dosages of ingredients aren't specified on the label.

We like knowing what we're ingesting, especially when it comes to stimulants such as caffeine and yohimbine.

The fact that it contains a proprietary blend makes it quite difficult for us to give you a detailed writeup on the ingredients, but we will do our best. 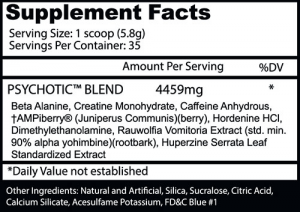 One serving of the Psychotic pre-workout is 5.8 grams. Let's say it close to 6 grams, which means it is definitely on the lower end compared to other popular pre's.

To give you an idea:

However, since we don't know the exact dosages, it's hard to say if they contain the right amount to boost workout performance.

Psychotic also contains Caffeine anhydrous, but we're unable to say how much Caffeine it has per serving.

Then we have AMPiberry, also known as Juniperus Communis, which is said to be comparable to DMHA. It's pretty much a stimulant that helps emphasize the effects of Caffeine, creating a synergetic effect.

On top of AMPiberry, you also get Hordenine HCl and Rauwolfia Vomitoria Extract (alpha yohimbine). These are also two potent stimulants that will help raise energy and awareness.

Also check out or review on a Insane Veinz, produced by the same company.

Can It Cause Side Effects?

Since there are several stimulants in this product, such as alpha yohimbine, it's a good idea to start with half a serving to prevent adverse effects.

Especially if you're sensitive to stimulants, make sure to proceed with caution as it kicks in quite hard. You don't know the dosages it contains, so we don't recommend adding other caffeine sources.

By safely assessing your tolerance, you shouldn't be getting any side effects. If you do experience them, make sure to lower the dosage next time.

Do We Recommend Psychotic Pre Workout?

If you're looking to give your workout a boost by increasing energy only, you can consider giving the psychotic pre workout a try.

From our experience, the focus and pumps were not that strong. However, this might be different for you as we have quite a high tolerance for these products.

We also found it to be relatively expensive for what you're getting. A bottle of 35 servings costs $54.95 on the official site.

For a pre-workout that optimizes your workout from every angle, we recommend Wrecked, which we found to be the best pre currently available.

What is stronger than psychotic pre workout?

If you're looking for something more potent and more effective, we recommend checking out Wrecked by Huge Nutrition. It's got a 20 plus gram serving size, meaning it's got four times the serving size compared to Psychotic.

Unfortunately, because this product contains a proprietary blend, it does not specify how much caffeine it contains. If we had to guess, I'd say it is between 300 to 350mg per serving, but we can't confirm it.

Is this product bad for you?

As we've mentioned before, it contains several stimulants that should be approached with caution. We believe it can be used safely.

The psychotic pre-workout by Insane Labs is a reliable product if you are looking to get that energy rush before slamming the weights.

The serving size is relatively low, but it's made up out of several powerful stimulants. We found that it's mainly good for energy, whereas the pump and focus are lacking.

If you have experience with Insane Labs's Psychotic, share your opinion in the comments.

Insane Veinz Pump Pre Workout Review: Is It Worth Trying?