Pre Kaged by Kaged Muscle has been a very popular pre-workout on the market for years and for some reason we haven't reviewed it yet.

Recently they changed their formula and they basically claim that they have the biggest serving size in the market!

They seem to use multiple patented ingredients that are all backed up by science.

Well, that's enough reason for us to check them out and put them to the SupplementsReviewer test. 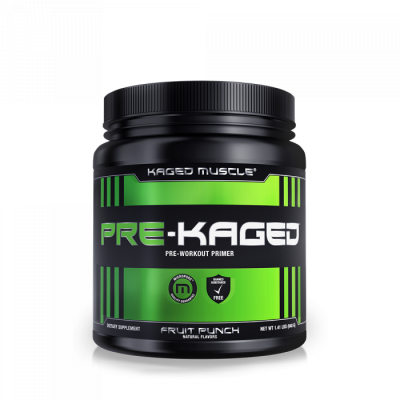 Check out the best pre-workout of 2020

What is Pre Kaged?

Pre Kaged is a pre-workout supplement designed and distributed by Kaged Muscle. It's said to do the following things:

We've seen these claims before, but they seem to have taken it to the next level with this supplement.

They seem to really put the focus on quality and only including ingredients that are actually proven to be effective. We personally really like this approach and seen that before with Wrecked or Preseries Bulk.

They seem to hammer on the fact that they have a 30-gram serving size, which is pretty high in comparison to other pre-workouts.

The highest we've seen is 26 grams from Pre-Jym, and most of the time, they add a lot of BCAA's to up the dosage.

However, we first need to take a look at the ingredients to really found out how good it is.

When we review a supplement like Pre Kaged, we always test it out multiple times to get an honest opinion.

We always take a full scoop, 20-30 minutes prior to working out, and almost always on an empty stomach.

We will review the product based on the uses of the product and the claims that they make.

When taking it I noticed an increase in the amount of weight I could push. It wasn't that much, but it was noticeable. They added a decent amount of Betaine Anhydrous and Beta-Alanine so that could do the job.

The energy was probably the most disappointing factor. After taking it multiple times, we didn't notice any of that unstoppable energy they mentioned.

And that is not very strange because they haven't added many stimulants other than caffeine.

We also didn't notice any focus effects while taking Pre Kaged. It could be that we are just too used to taking caffeine and the dosage was too low.

When we looked at the label we noticed that they added 6.5 grams of L-Citrulline which is a good dosage for increasing nitric oxide.

While working out we felt a greater pump than usual and could lift more sets, which was really amazing!

Pre Kaged is known for its big and clinically dosed formula.

However, what ingredients are in there and how much?

When we took a look at the ingredient label we noticed that they are completely transparent and don't use any property blends, except for the SPECTRA blend, but we will cover that later on.

The formula consists of some very good and solid ingredients that you really would like to have in your pre-workout.

6500mg of L-Citrulline is a good dosage and will help you greatly with improving Nitric Oxide.

They added 3 grams of BCAA's, which is, in our opinion, a low dosage and is more effective at 5-10 grams per serving.

L-Leucine has been added as an anabolic activator, which is partly true since it has been shown to increase protein synthesis.

I really like how they added Betaine Anhydrous, Beta-Alanine, and Creatine since they are all known to increase either strength or power output.

However, the dosage could be increased to at least 3-5 grams of creatine and the Beta-Alanine to 3.2 grams.

The ingredients and formula look very solid and really thought through. However, in our opinion, it's missing some stimulants that could really give you that energy kick, which we missed with Pre Kaged.

They also added lots of patented blends like SPECTRA, which consists of many different extracts, but what does it actually do?

I couldn't find any studies that could back up the claims that they make. However, I am sure that it has positive effects on the health of the body, but it's not something I would like to have in my pre-workout.

This is a pretty high price compared to some of the best pre-workouts. The only competitor with a higher price is Ghost Legend Pre Workout.

However, compared to most other pre-workouts you will get a large serving size, making it a little bit better.

Pre Kaged is a solid pre-workout with a very stacked label which will give you muscle pumps and strength during your workout.

The price is quite high compared to others, but you will get a stacked serving size.

The only thing we are missing with Pre Kaged is the energy and focus. So if you're someone that is looking for a real ‘kick' and tunnel vision focus we would recommend taking a look at Wrecked.

Wrecked has a similar serving size, but is more focused on giving you a killer workout with energy, focus, and pumps.

Epiandrosterone Guide: Our Cycle Results & Best Way To Use!