Mr. Hyde NitroX Review: How Powerful & Effective Is It?

ProSupps claims that Nitrox is the leader in energy, focus, pumps, and all with scientifically researched ingredients.

We've seen that claim with basically every supplement company, but let's find out if Nitrox is different than other pre-workouts on the market.

In this Nitrox review, we will be showing you the ingredients, our personal experience, and if we would suggest using it!

What Is Mr. Hyde Nitrox?

Mr. Hyde Nitrox is a pre-workout supplement containing various ingredients like amino acids, plant extracts, and stimulants. They claim that it will give you energy, focus, muscle pumps, power, and endurance.

Nitrox is designed by a company called ProSupps. They've been in the supplement industry for many years and designed multiple supplements for fitness and bodybuilders.

Nitrox is one of their pre-workout supplements. They also have Mr. Hyde Signature, Test Surge, and Icon, which all have a different kind of blend with different purposes. 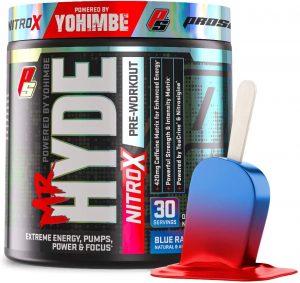 Check out the best pre-workout of 2020

A tub of Nitrox contains 30 servings, and per scoop, you get 7.3 grams of their ingredient blend, which is on the low end compared to other pre-workouts like Wrecked(21,1 grams), Preseries Bulk(22 grams), and Amped AF(14 grams).

However, this doesn't mean it's a bad pre-workout. It all comes down to the active ingredients, dosages, and combinations.

Now we know what Nitrox does, let's take a closer look at the ingredients and the blend.

It's always good to see that a company doesn't contain a proprietary blend. This means that they are completely transparent.

A first look at the ingredient label shows that they break it down into three categories: Strength, Caffeine(energy), and Intensity.

Let's find out more about the active ingredients and what they could do to improve your workout.

The first thing we noticed: It contains multiple staple ingredients like Beta-Alanine, Creatine, Citrulline, and Caffeine.

That's a good basis for a pre-workout; however, the dosages are on the low end to be effective. For example, the clinical dosage of Beta-Alanine is 3.2 grams, and L-Citrulline needs to be at least 6 grams or more to be effective.

In this study on the effects of Beta-Alanine, they used 6.4 grams per day, which gave them significant improvements in the one rep range.

The same applies to creatine; they only added 1 gram, which basically isn't enough to get you the real benefits. In most studies, they use a dosage of 3-5grams per day.

There is one ingredient they have used enough of Caffeine. Caffeine is an amazing stimulant that will most definitely help you with energy before and during your workout.

In Nitrox, they added 420mg of caffeine, which is quite high compared to other pre-workouts. I would say the sweet spot is around 250-300mg.

So, if you're not used to drinking or taking caffeine, I would highly suggest starting with half a scoop since this could cause some adverse effects like insomnia and headaches.

Last but not least, they added Yohimbe Bark extract, which is known as a powerful stimulant that has the ability to increase athletic performance and fat loss.

A combination of Yohimbe and Caffeine is often used as a fat-burning stack, but also for increased energy levels. Personally, I think that 420mg of caffeine and 3mg of Yohimbine can be quite harsh, and I would recommend using half a scoop for the first time.

In short, they added good ingredients but with the wrong dosages. ProSupps went very high on the caffeine, and with the Yohimbe combination, you could feel a little over stimmed.

Our Opinion on Mr. Hyde NitroX

We've purchased a tub with the Blue Razz flavor and really enjoyed the taste. It wasn't too bad but certainly not the best tasting pre-workout we've taken.

The packaging feels nice, and they did a great job of designing it.

After using it a couple of times, we've come to the conclusion that this is not our favorite pre-workout. While it did gave us energy, it didn't help with focus, strength, or pumps at all.

We've also noticed a ‘crash' feeling after the workout, which is expected with the Yohimbe and caffeine combination.

In our opinion, they haven't done a great job of formulating this product. They added solid ingredients but lots of them are way underdosed.

We would not advise using this pre as there are many different options available in the same price category, for example, Wrecked by Huge Nutrition.

NitroX by ProSupps is a good-looking pre-workout with solid ingredients, however, it isn't really effective in terms of pumps, power, and focus.

We've only experienced an increase in energy, but that is expected with the number of stimulants added.

If you're using it, make sure to start off with just half a scoop since it could be very overwhelming.

We would not recommend using it, since there are better options out there. We would highly suggest checking out our top 10 best pre-workout page.